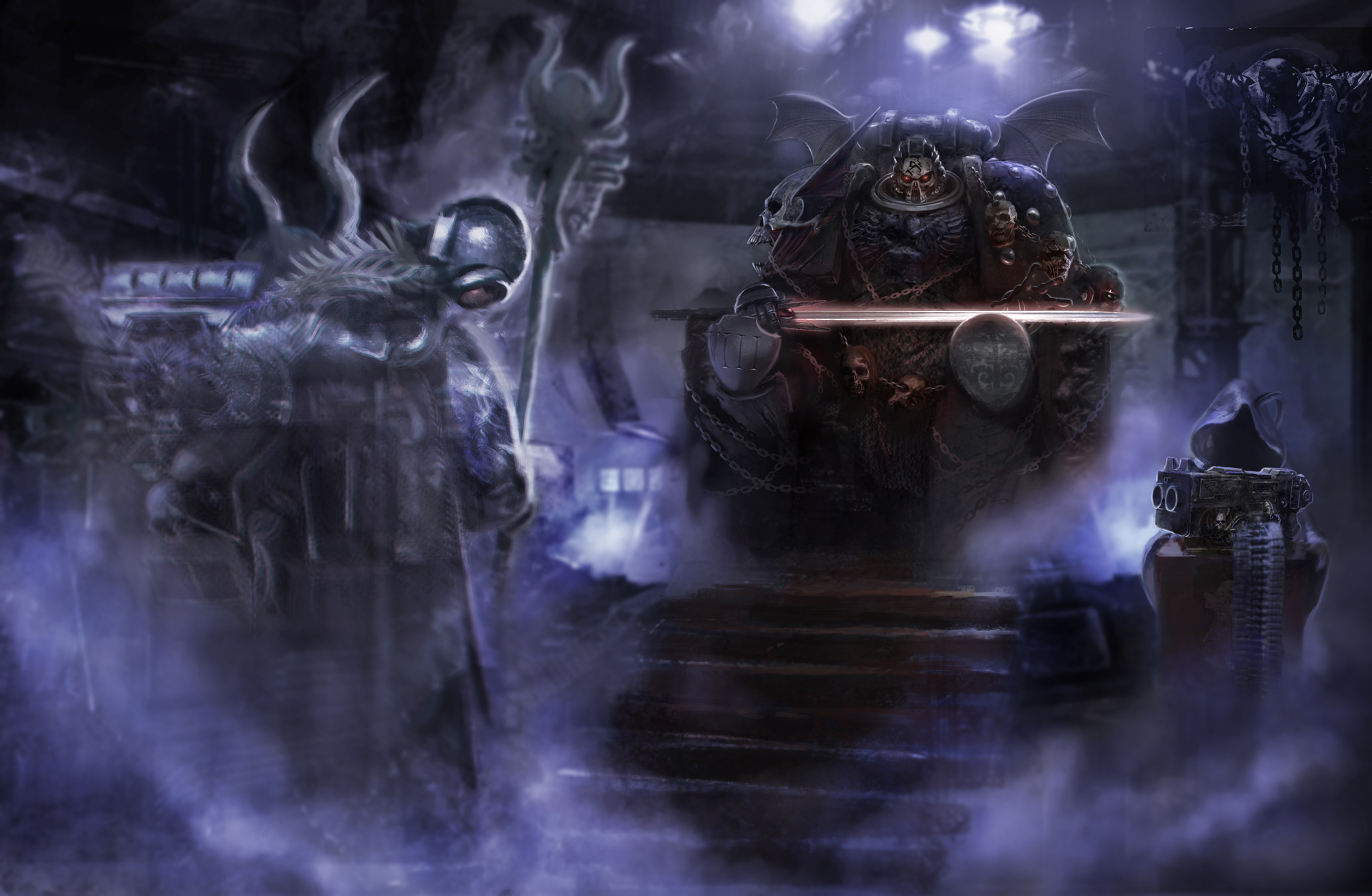 Here's a look at the new shinies I got the other day. They're done by Rob, over at 30K plus 40K equals infinity, over the span of a few months. He had some delays, weather, moving houses, lack of stock in his FLGS, but came through like a champ! I'm thrilled with the results, and he's every bit the skilled painter I made him out to be!

A group-photo. Not too thrilled about it (the photo that is). The variety of colors makes it look messy I guess? Nothing really pops, except perhaps the banner...

The Assassins came out sweet, very mysterious, very much the loners they are. The Champion (a metal model) and Chaos Lord (resin) are beautiful by themselves, I hope they fit in with the rest of the bunch when they arrive! :)

Mechanics meets daemonflesh! Very nice combination of matte coloring and shining rims. The red really stands out over the incorporeal grey-ish green!! When I sent them out I envisioned it the other way around, a green-ish grey, but this combination is growing on me. I like it more every time I look at it! :)

Same as with the Helbrute, the combination came out amazing! Again the red really popping out in the neck!!

Some more of the same combination. I love the meshing between the flesh and metal in the "neck", where muscles move into the shoulder vents/intakes! Also, the swords really stands out. Awesome model with an amazing finish!

This probably won't see a lot of playtime at first, starting out with a list lower than 1000 makes it too expensive. But lateron, for sure this will be a designated transport! The lightning came out really, really, REALLY nice. This will turn heads, I'm sure!

Yes, an Imperial Knight. It's a hefty price to pay for such a model. Just to make sure: I'm not trying to pose as a superwealthy look-at-me-wasting-money kind of person here. I never had plans for even fielding one so far...

I picked this up for little under 20 EUR. It was in pieces, the seller said it wasn't an original and he wasn't able to make it line out nicely. I figured I'd use it as some interactive scenery!?

For instance, with the Thermal Cannon arm, I can put it dead-smack in the middle, which has - due to no longer having a power source - enough power for just one or two shots, where people need to roll 2d6, higher than 9, to be used as a weapon of destruction :)

The torso is a very nicely painted LoS-breaker, for units to hide behind. The banner (adorned with two Dark Angel heads, very bloodily removed from their accompaning bodies) adds a fantastic bit of flavour to it all!

Please note that - as a personal touch, and an expense-saver - the rocks on there are actually from his garden. Luckily he doesn't live near Dover, the cliffs would've been too much... ;-)

Some new pictures (with the camera now instead of the phone) of the Spawn and statue, by D PowerStill looking damn nice! :)

For the bases of the special chars and daemon I have something special in mind. I've tested a few bases so far, not dissapointed with them, but much room for improvement!

I'm thinking orange for the daemons, yellow for the aspiring champions and special characters, to make them easily detectable. Please let me know what you think in the comment-section below!?

In the next few weeks I'll post some pictures and a how to on those bases, I need to do some fine-tuning first...

Also, some more scenery to be done (and a hefty dissaproval of a brand I thought was supposed to be good...)!